Keeping Up with the Tecomas 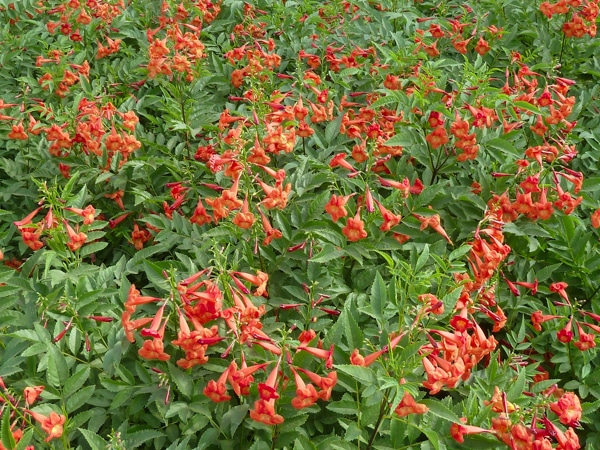 Take a look around Tucson in the summer, and you’re bound to see at least a few of these tropical-looking but sun-loving beauties blooming like crazy. Tecomas have gotten a lot of attention through the years for their remarkable heat tolerance, speedy growth, pest resistance, and ever-blooming habits. For some of us, the fact that they attract hummingbirds and butterflies from spring through fall is enough to want one planted in every corner of the garden!

There was very little variety in the types of Tecoma that you could buy at garden centers in the past, but we’ve recently seen something of a boom in the development of unique hybrids that offer new variations on flower color and growth habit.

If you’re a garden club member, then you already know that this week’s mid-week special is a discount on Tecoma, so we thought you might like to know the differences between the types that we growing here at Civano Nursery.

Arizona yellow bells (Tecoma stans var. angustata) – This native species is easy to identify because it has narrow, strappy leaves with toothed margins. Its flowers are bright yellow with slightly darker guide lines in the throat for pollinators, and they’re smaller than the flowers borne on the hybrid varieties. It grows up to 10 feet tall in Tucson, but can be pruned and maintained at a smaller size if desired. Arizona yellow bells is taller than the other species we grow, with the exception of ‘Orange Jubilee’. It’s also more tolerant of drought, and slightly less bothered by chilly temperatures. Wildlife will recognize and appreciate this native species more readily than the hybrids.

Orange Jubilee (Tecoma x ‘Orange Jubilee’) – Probably the most popular Tecoma on the list, ‘Orange Jubilee’ is also the largest. Although there is a bit of confusion about the correct botanical name for this cultivar, it’s generally thought to be a hybrid between T. alata and T. stans. Its flowers are slightly smaller than those of the other hybrids, but they’re plentiful enough to keep the hummingbirds busy all day from spring through fall. Depending on how it is pruned and supported, this Tecoma can be treated as a shrub, a vine, or even a small patio tree.

Gold Star (Tecoma stans ‘Gold Star’, a.k.a. Wide Leaf Yellow Bells) – This large-flowered selection was first spotted in a private garden in San Antonio, and it made quite a splash in the industry back in 1999. It stood out because it began blooming earlier than the others, producing lots of flowers even as small cuttings in nursery liners. Earlier flowering makes for a longer season of yellow trumpet-shaped blooms, and like the Tecomas listed above, the flowering season can be extended even further by pruning off the long, bean-like seed pods before they mature. This is a slightly more compact cultivar, usually topping out at about 6-7 feet tall in Tucson.

Lydia (Tecoma x ‘Lydia’) – With its wide leaves and yellow flowers, this hybrid is similar in appearance to ‘Gold Star’, but if you compare the flowers you’ll see that ‘Lydia’ offers a brighter yellow color with a neat white throat. These flowers drop from the plant when they fade, giving it a cleaner appearance throughout the blooming season. It also produces very few seed pods each season, so flowering continues effortlessly from spring until the first frost. ‘Lydia’ has a spreading but compact form, rounding out to about 6 feet tall by 5-6 feet wide with no pruning.

Sparky (Tecoma x ‘Sparky’ PPAF) – This hybrid is one of the newest additions to the market (making its debut in 2012), and since it was developed in Phoenix by an ASU professor, we can forgive it being named after their mascot. Its large flowers are colored a beautiful apricot yellow with reddish orange throats, and it produces few (if any) seed pods. Like the other designer hybrids, ‘Sparky’ has a compact growth habit, but it tends to be more upright than spreading, growing to 5-6 feet tall by about 4-5 feet wide.

Bells of Fire (Tecoma x ‘Bells of Fire’) – Developed by the same ASU professor in Phoenix, ‘Bells of Fire’ has fiery red blooms in the cooler spring and fall seasons, with deep orange blooms through the hottest parts of the summer. This was the first red-flowering cultivar to hit the market, and so far, it’s the most compact red-flowering hybrid, growing to only 3-5 feet tall and wide. ‘Bells of Fire’ tolerates a bit more shade than other Tecomas, but will still flourish in full sun locations here in Tucson. This hybrid will shed its spent flowers, and produces fewer seed pods, so it will stay tidy and keep flowering throughout the season without the need for deadheading or pruning.

Cape honeysuckle (Tecoma capensis, formerly Tecomaria capensis) – Recently renamed to be included in this group, cape honeysuckle looks different, but it behaves much like the other Tecomas on this list. Red-orange flowers appear from spring through fall, attracting hummingbirds throughout the season. This species is native to South Africa, where it can grow up to 20 feet tall with support. In Tucson, however, winter temperatures usually keep it restrained to a more manageable 4-8 feet tall and wide without the need for pruning (except to remove a few frozen branches in spring). With a bit of effort and a good pair of pruners, cape honeysuckle can also be trained into a ground cover, a vine, or a small patio tree.