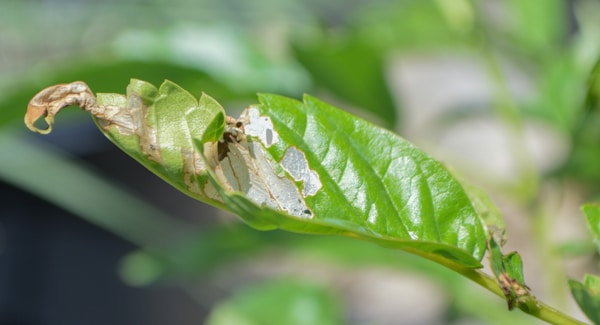 If you’ve been following our blog, you’ll remember that we recently posted about Tecoma, a popular hot garden plant that you can see blooming through the summer all around Tucson. While I was out taking photos for that post, I noticed a problem that many gardeners in our area may see this time of year on their own Tecomas at home.

At first glance the plants looked water stressed; the new growth seemed stunted, and some of the older leaves were crispy and brown. However, a closer inspection revealed that some of the leaves had irregular shaped holes, some were rolled up or folded, and the brown patches were sporadic rather than along the leaf edges. All of these clues pointed to an insect pest, so I began searching for the culprit.

I had to look even closer, but it didn’t take very long to find more evidence. The tiny black pellets and silky webbing that are visible just under the fold in this leaf told me that there was a caterpillar hiding inside. I knew it was a caterpillar and not a spider because of the pellets. We call bug poop “frass” in the garden industry, and it can often be a useful tool in identifying what type of pest is (or was) present. Even after the insect pest has moved on, the frass that it left behind can be a helpful clue. Caterpillars leave these telltale little pellets.

I gently pulled the folded leaf open to see the caterpillar hiding inside.

(The culprit is exposed.)

Opening a few more folded leaves revealed more of the caterpillars at different stages of development.

(This one immediately started trying to re-seal itself by stringing webbing back and forth across the leaf.)

(Frass, webbing, and several caterpillars were found sealed between these two leaves.)

A quick internet search taught me that the culprit is called Antigastra catalaunalis by scientists. The rest of us call it Sesame Leafroller Moth, or Tecoma Leafroller Moth. Though it’s common in many tropical and subtropical parts of the world, this moth is fairly new to the Sonorn Desert. Scientists are still working to learn the specifics about its life cycle here so that we can control this pest more effectively. What we do know is that there can be 2 cycles per year, so caterpillars can be present in spring and again in mid to late summer.

Many types of caterpillars protect themselves the way that the Tecoma Leafroller does. Thick webbing keeps the leaf folded securely around the larva so that it can stay hidden from predators while munching away on plant parts. This extra protection also makes it more difficult for us to treat the caterpillars with many of our common contact pesticides, but we humans still have some tricks up our sleeves.

(Thick webbing helps protect the caterpillar as it eats.)

A safe and simple way to reduce the pest population is to pluck and destroy damaged and folded leaves before the caterpillars are able to become adults. This works fine if the problem is limited to just a small portion of the plant, but a larger infestation may require slightly bigger guns.

Organic products that contain Bt (a bacteria that is deadly only to caterpillars), and spinosad (a naturally produced chemical), will treat for caterpillars without harming other insects or the environment. Unlike the non-specific pesticides that kill many types of insect on contact, these products kill the caterpillars only after they’ve eaten the treated plant material. This means that it may take a few days to see results, but the likelihood of killing your targeted pest is much greater. It also means that these methods of control are only effective when the pest is in its larval stage, since adults and pupae don’t eat leaves.

(Captain Jack’s Deadbug is an organic pesticide that uses the active ingredient spinosad.)

With increased use of its host plants in our landscapes, and with few natural controls (like predators or disease) to keep it in check, scientists expect to see populations of this moth rise before they begin to get better. Early detection and quick action are your best methods of defense, so keep an eye on your Tecomas around springtime and in late summer to nip these buggers before they become a problem in your yard!