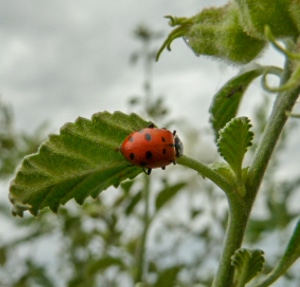 We all know that there are good bugs and bad bugs in our gardens, and many of us are aware that getting rid of the bad bugs often means that you’re getting rid of the good ones too. Unfortunately, when you eliminate good bugs, it’s not uncommon to see the bad ones come back in even larger numbers without their natural predators to keep them in check.

To avoid this frustrating cycle, why not try inviting more of the good bugs to your garden and spending less time with the sprayer?

(This hoverfly is laying eggs next to a small but growing population of aphids.)

Many of our beneficial insects, like the ladybug, eat different things as adults than they do in their larval stage. As larvae, they often feed on pests (such as aphids), but as adults they get their nourishment from the nectar or pollen of their favorite plants. Making use of these plants in your garden increases the chances that beneficial insects will stick around when it’s time to lay their eggs.

(Hopefully, this ladybug is laying eggs that will hatch into hungry larvae.)

(This ladybug larvae has already eaten many insect pests, and will become an adult ladybug soon.)

High ranking on our list are herbs and native plants, as these are common beneficial insect attractors that won’t become invasive in the desert. Native plants are more likely to attract local bugs than imported plants are. Their big bonus is that they’re already adapted to our climate, so they often require less water, thrive in full sun, and tolerate our extreme heat and soil conditions better than non-natives. Herbs may require a bit more water and/or shade, but they’re useful enough in the garden (and the kitchen) to be worth the extra effort. Many herbs do double-duty as a beneficial insect attractor and a natural pest repellent at the same time!

(Assassin bugs are often mistaken for the dreaded kissing bug, but this insect is harmless to people and beneficial in the garden.)

(When this egg sac hatches, lots of hungry baby mantids will be looking for aphids to eat.)

So, without further ado, here’s our list of the best plants for attracting beneficial insects to your garden, and keeping them there for generations (insect generations, that is)!

Plants that attract beneficial insects to your garden

*Asclepias tuberosa (Butterfly Weed) – Ladybug, bonus because this is also a great nectar plant for adult butterflies (especially the Monarch).